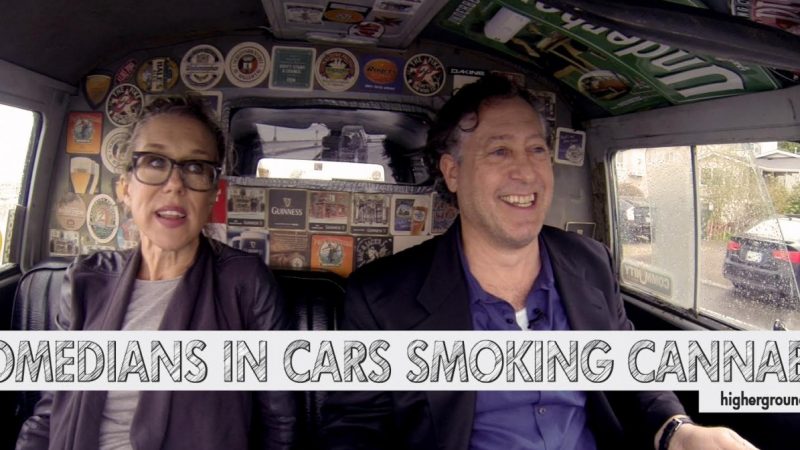 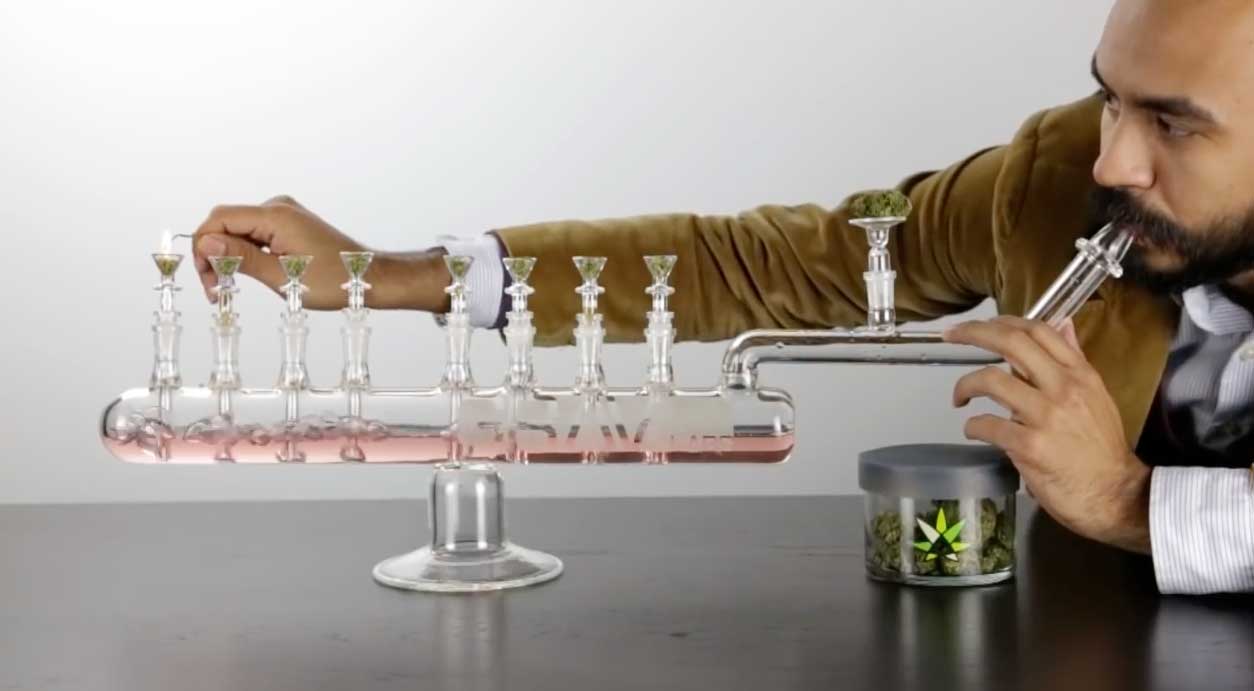 The High End: The Most Expensive, Outrageous, Over-the-Top Cannabis Products in the World

By Michael A. Stusser — 6 years ago

Host Michael A. Stusser gives a stoned TED talk on the incredible and outrageous products available for cannabis consumers. From $100,000 glassware to solid gold grinders to elegant canna-fashion, The High End covers it all. 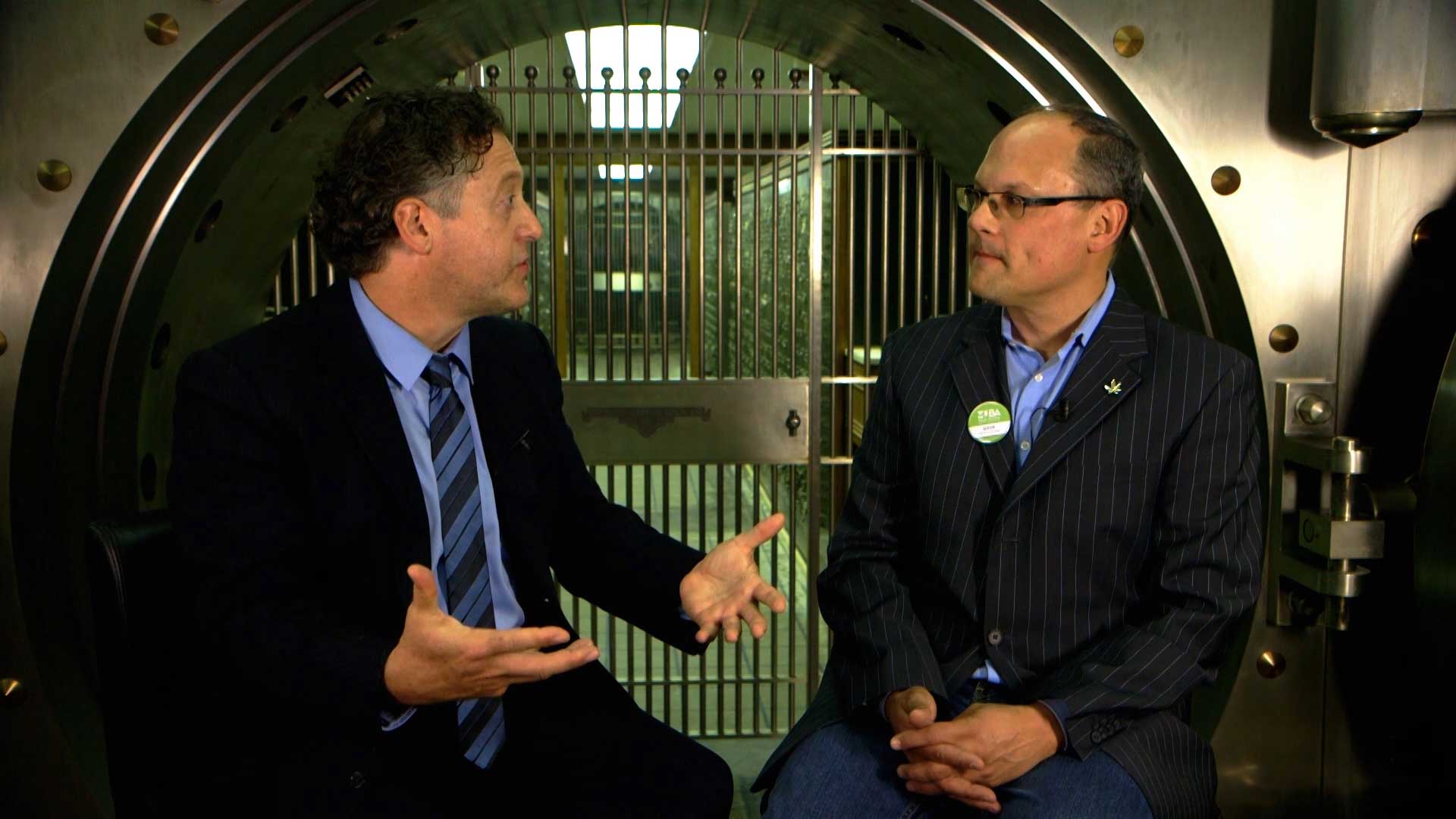 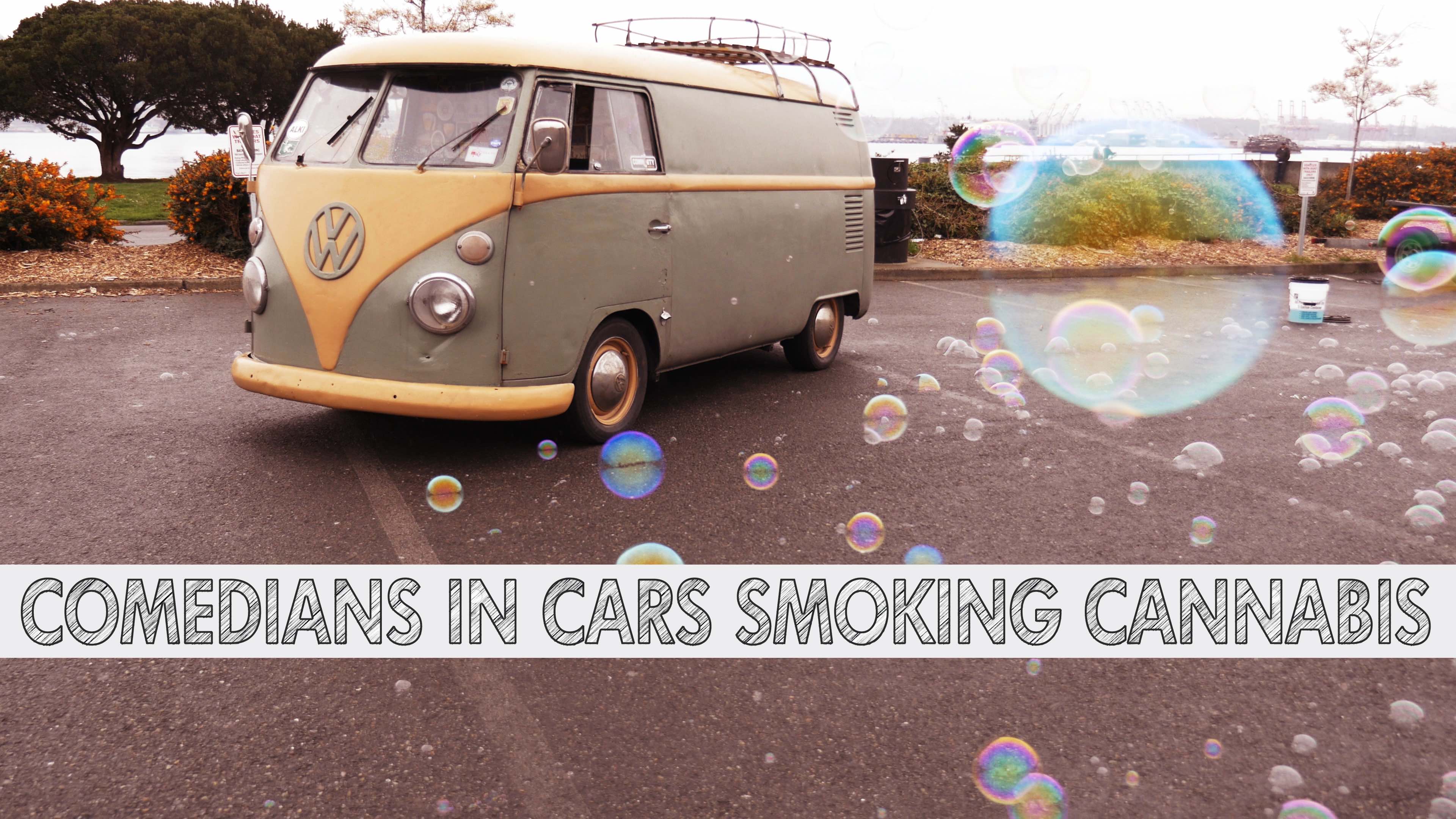 Seattle, WA – Just in time for 4/20, comes Comedians in Cars Smoking Cannabis – a parody of Jerry Seinfeld’s Comedians in Cars Getting Coffee. Created by award-winning filmmaker Michael Stusser (“Sleeping with Siri”) – who hosts the web series Higher Ground – the spoof features comedian Lauren Weedman (The Daily Show, HBO’s Hung and Looking, Curb Your Enthusiasm) along with a fabulous 1965 VW Bus.

In Comedians in Cars Getting Coffee, Seinfeld introduces a vintage car, and then picks up his guest comedian, and drives to a cafe or restaurant for coffee. Comedians in Cars Smoking Cannabis also introduces a vintage vehicle (a very beat-up Volkswagon Bus – identical to the one featured in Fast Times at Ridgemont High), but instead of getting jacked up on coffee, these comedians get stoned out of their minds on legal marijuana.

ABOUT HIGHER GROUND
Higher Ground is a media-arts production platform that creates highly-produced video assets including a flagship satirical-news program (a mix between The Daily Show and CNN, just without that annoying Wolfe Blitzer fellow), a syndicated column on the legalization movement, along with viral social-media parodies.

“We’re really trying to Elevate the Dialogue about cannabis,” says Editor-in-Spleef Stusser. “And we’re using humor and social media to not only normalize the use of marijuana – but put it in context. People like weed – and they’ve been smoking it forever; time to make it legal.”

Comedians in Cars Smoking Cannabis was directed and edited by Marty Riemer (Twisted Scholar). Director of Photography for the shoot was Mark Goodnow, of the Production Foundry. The team also created the award-winning documentary, “Sleeping with Siri,” which featured journalist Stusser attempting a week-long Techno-Gorge, followed by a lengthy Digital Blackout.

Higher Ground explores and celebrates the elevated aspects of getting high. Founded during a revolutionary time of economic and spiritual transformation in the legalization movement, the brand will document and chronicle this incredible time in our history, and advocate for the legalization of cannabis (along with civil rights, gay rights, and human rights), and embrace the end of – yet another – prohibition.

Seinfeld’s series, “Comedians in Cars Getting Coffee” most recently aired its seventh season, and is distributed by the digital network Crackle. http://comediansincarsgettingcoffee.com

Lauren Weedman’s new book, Miss Fortune: Fresh Perspectives on Having it All from Someone Who is NOT OKAY, was published by Plume in March 2016. 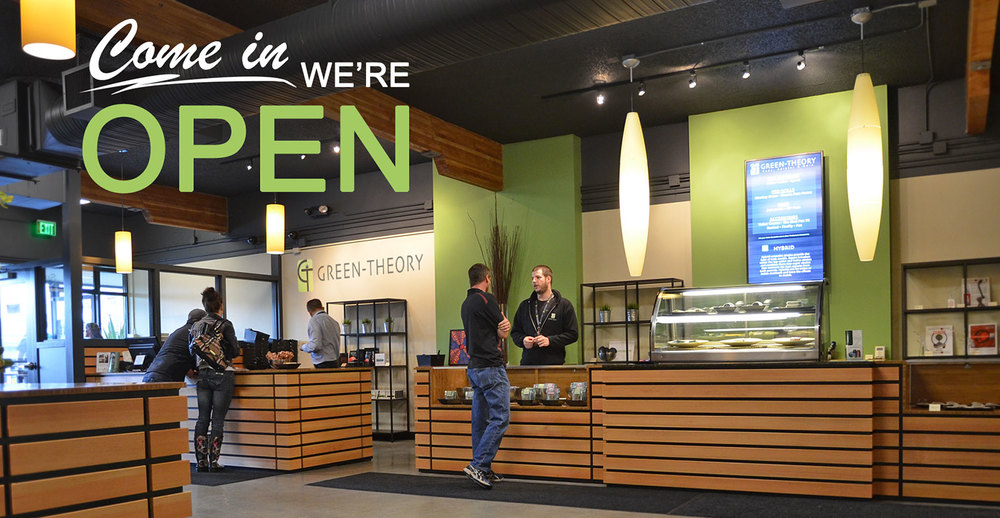 The HIGHest-End Marijuana Store in the World

Though cannabis is constantly in the news, very few people have actually been inside a legal recreational store. We went to Green-Theory, a high-end marijuana shop a few miles from the Microsoft campus. Here’s what legalization – and the future of weed – looks like! 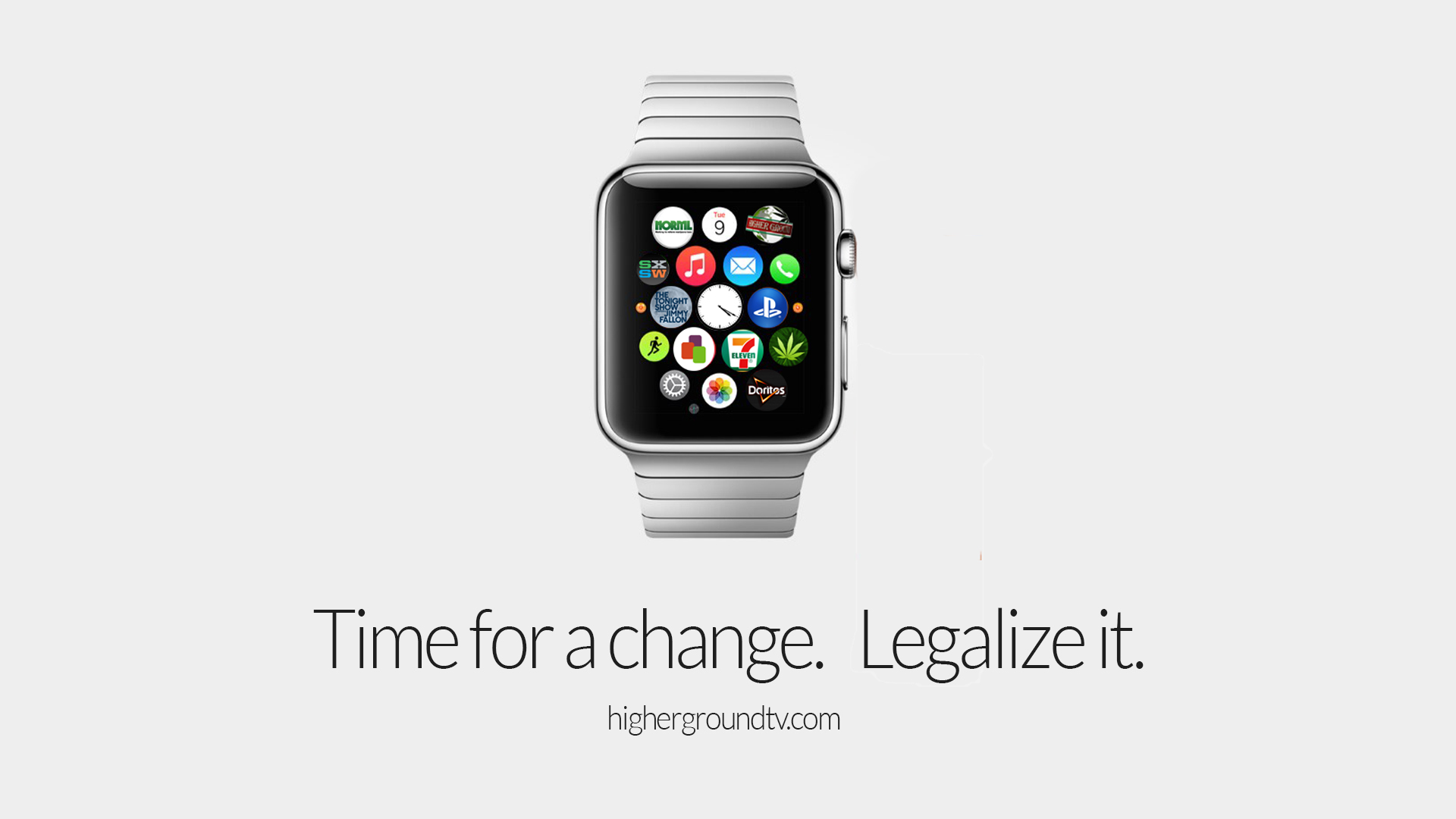 weedWatch Parody of Apple Watch Advocates “Time for a Change”

“weedWatch” Parody of Apple Watch Advocates “Time for A Change”

Seattle, WA – Coinciding with the marijuana holiday 420 and the release of the Apple Watch on April 24th, a Seattle-based multi-media company, Higher Ground, has created a parody ad to bring attention to marijuana legalization. The ad (“WeedWatch”) features a photo of the iWatch with the simple text, “Time for a Change: Legalize It.” A variety of marijuana-related icons and apps are featured on the device’s face.

One of the most innovative features of Apple’s Watch is the ability for users to customize the face of the device, and add additional information. In Higher Ground’s parody, they have taken the liberty to do just that! The watch face is full of humorous and advocacy-related apps including NORML (National Organization for the Reform of Marijuana Laws), SXSW, Leafly (a Yelp-like mobile app for marijuana), 7-11, Cannabis News Network, and Doritos. The time? 4:20.

“The Apple Watch is a revolutionary product, and the legalization of marijuana in States across the country is also a revolutionary movement,” notes Higher Ground Editor-in-Chief Michael A. Stusser. “The message of our parody is as simple as the solution to the War on Drugs: Legalize It. It’s time to end Prohibition, and legalize, regulate and tax cannabis at the federal level.”

Based out of Seattle, where recreational marijuana was legalized in 2012, Higher Ground is attempting to “Elevate the Dialogue” and broaden the movement nationally. While legal in Washington, Colorado, Alaska and Oregon, the use, sale or distribution of cannabis is still a felony at the federal level, and over 600,000 Americans are arrested every year for marijuana-related offenses. The parody ad is being strategically placed in weekly newspapers (and on-line) in states where marijuana initiatives are being proposed, including Ohio, California, Nevada, Maine, Michigan, Massachusetts and Arizona. It will premiere as a full page ad in the Marijuana Green Pages.

The launch of the Apple Watch continues to garner significant media coverage, as it is the first new product device from Apple since CEO Tim Cook took over the company. PreOrders for the iWatch began on April 10th, selling over a million units, and will begin shipping on April 24th. Using guerilla-style marketing, Higher Ground’s WeedWatch campaign will appear on posters, leaflets and mobile billboards adjacent to Apple stores nationwide.

Higher Ground produces the world’s first satirical news program about the legalization movement, along with a newspaper column and website. A multi-media company, Higher Ground creates highly-produced video assets including a flagship program (a mix between The Daily Show and CNN, just without that annoying Wolfe Blitzer fellow), a syndicated column on the legalization movement, a comprehensive and entertaining news website, events (Cooking with Cannabis!), along with viral social-media parodies.

Higher Ground has created a variety of videos and parodies that attempt to vaporize stoner-cliches (including a ReMix of Cheech & Chong’s iconic “Up in Smoke”), while also educating the public on the changing landscape of legalization. Along with their YouTube videos, the company has repurposed posters from the Reefer Madness era with an Original Artists Series, updated MadMen (whose characters smoke from vaporizers instead of cancer-sticks), and even crafted a Seattle Seahawks logo entirely out of marijuana in honor of the Beast Mode strain (named after running back Marshawn Lynch). Stusser’s Higher Ground column also runs in the Seattle Weekly.

Higher Ground explores and celebrates the elevated aspects of getting high. Founded during a revolutionary time of economic and spiritual transformation in the legalization movement, the brand will document and chronicle this incredible time in our history, and advocate for the legalization of cannabis (along with civil rights, gay rights, and human rights), and embrace the end of – yet another – prohibition. 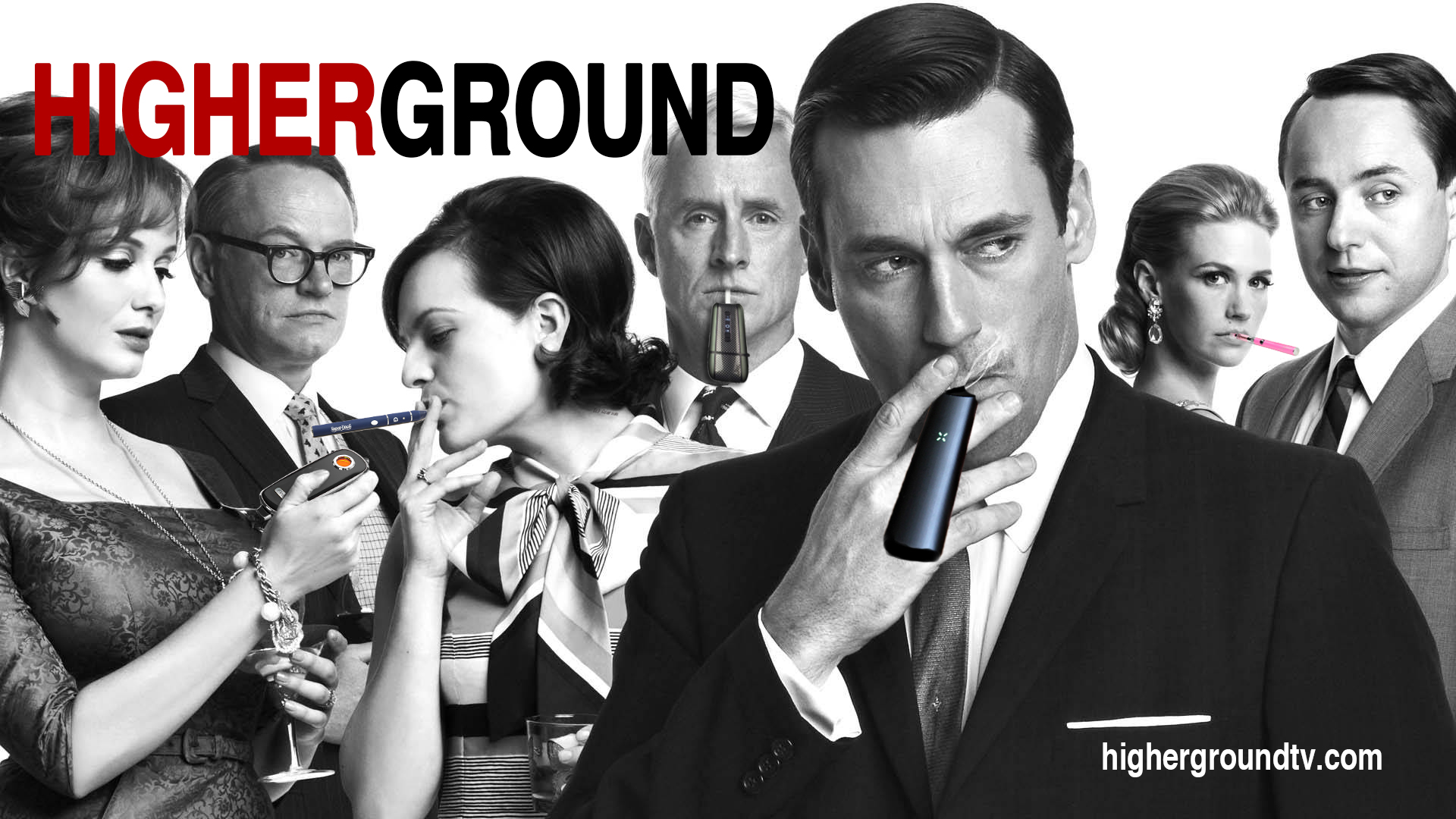 Though the incredible series MadMen is coming to an end, the staff at Higher Ground wanted to let everyone know that we’d be carrying the torch for many moons to come.

Since its premiere, Mad Men has received widespread critical acclaim for its historical authenticity, visual style, costume design, acting, writing, and directing. The drama has won 15 Emmys and four Golden Globes. It’s the first basic cable series to win the Emmy Award for Outstanding Drama Series, winning in each of its first four seasons

Watch the last episodes of MadMen on AMC. 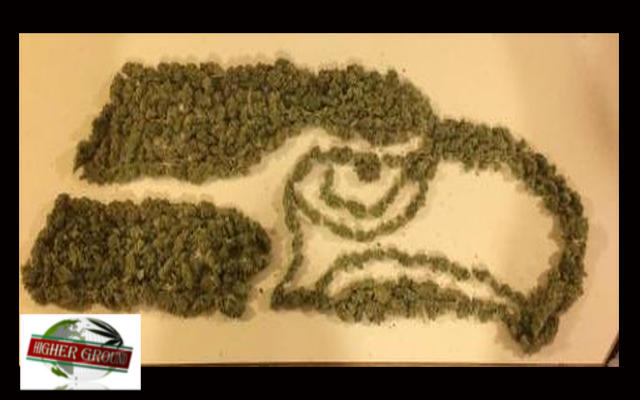 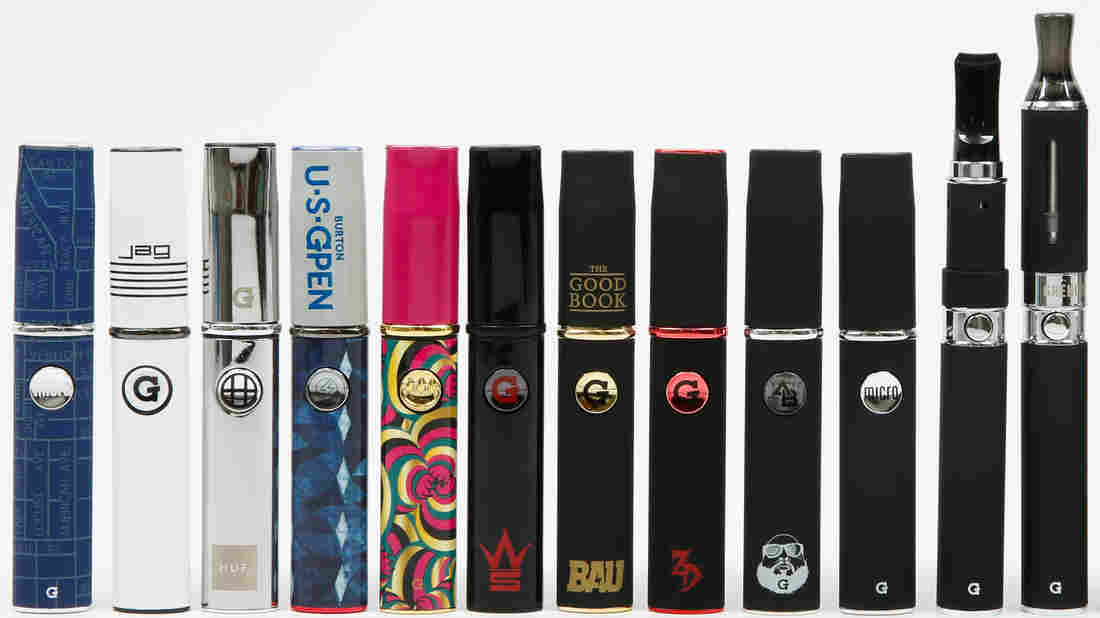 Vape Pens & the Future of Marijuana

The Oxford Dictionary named “Vape” 2014’s Word of the Year! Vape pens and vaporizers are now all the rage for marijuana use, and, while convenient, they make us a bit nervous….Here’s our exclusive report!